Twisting the Cliche. Are There Any New Ways to Write About Vampires?

Readers, how many times do you browse the paranormal shelves and get haunted by the undead?

Writers, how many times have you read agent wish lists that say: "No vampires, please"?

Yet, if you look, writers do come up with viable variations on the vampire cliche and write a fresh story.

A couple of my favorite variations. Ilona Andrew's mindless killers driven by by intelligent nasties. [I've never quite pictured the semi-humans in my mind, and I think the Andrews team wants it that way.] Charlaine's Harris' hierarchical kingdoms. Laurell K. Hamilton's pioneering efforts of vampire hunks which have now become a cliche in itself.

Now I've found a new twist on the vampire theme in Phillipa Bornikova's This Case Is Going to Kill Me that I like. Her vampires are affected by ultraviolet rays, not daylight. Think vampires feeding on specially fed hosts during business lunches behind screens  Also for Bornikova there are no female vampires. The reason remains vague even though the main character, Linnet Ellery, was fostered in a vampire family to gain career advantage.

After due law-school diligence, Ellery is given a position in a powerful vampire law office over the objections of one of the senior partners. Bornikova weaves together some nice plot threads to create no only the intrigue of a big-time law office plus a good detective story about searching for a will that totally disinherits a werewolf who think he owns a powerful security firm after he settles one claim to the business.

You might say Linnet Ellery has her hands full. I don't read many lawyer novels but I thought the plot development fresh, even the romance was handled differently. Oh, almost forgot. Yeah. There's a romance with a Fae, but it doesn't run down a one track cliche either.

Another Bonus Read:
I don't read many e-type books, but I'm slowly reading Revenir Intern by R. Mac Wheeler. [Available on Amazon] In a world at war, a teen is picked to intern with a vampire queen's forces after drawing the her attention with her junior essay. The short of it, spoiled Caitlan is forced to change her summer plans to hang out with a bunch of soldiers.

I haven't finished it yet because I need to get away from screens after spending all day sitting at one. Still the book keeps me stuck in my chair before the confuser longer than I must. Even though I sometimes have to turn off my internal editor. You might go to the Amazon page to see if the sample of Revenir Intern interests you. It's hooked me on its plot line and sense of humor.

Wish I could say I finished something I was working on. Am still waiting for the next set of edits for There Be Demons. Should be writing new stuff for Forbidden Fruit, but am revising from my critique comments. Revising from the edits of The Pig Wars which is now Black Tail's War.

Here's a second look of the cover since my website got first looks. You can read the first chapter at the website. Did you guess the book's the sequel to Troublesome Neighbors. 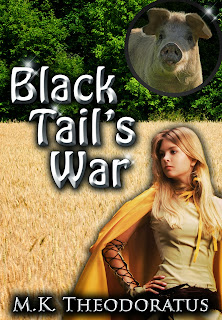 Thanks for the shoutout! :O)

It's my pleasure though I'm having trouble finding time to read through all the revisions I need to do.