20 Years and Counting -- Think You Could Write a 23-Plus Book Series?

The Anita Blake series by Laurell K. Hamilton has dwindled down to a "guilty pleasure" for me -- and no, not because of her multiple-multiple sex scenes. She's created characters I care about but often have no major roles in subsequent books.

Was hoping Kiss the Dead would change the pattern. But it's gotten worse. Many characters have just stopped growing as people. Or if a character has changed, like Claudia hinting she has a significant other in Kiss the Dead, Hamilton mentions it and drops it.  --[Claudia is a senior security guard in Master of Saint Louis' underground compound.]--

When I first started reading the series I was fascinated by Hamilton's plot twists and her take on the preternatural/ paranormal conventions. I also like the the fact the main character is short and Mexican/German. --[Hey, there aren't that many of us around in the US.]-- Even understood the conflict of Blake's abilities to raise the dead and the Roman Catholic church, not to say her German grandmother, who unfortunately never made an appearance in the books. Unfortunately, Blake has moved on from her conflicted youth to accepting her unconventional, polyamorous live style.

Yeah. I consider the books a guilty pleasure because, even though Hamilton kept her place on the best seller lists, the plot lines got thinner and thinner and potential conflicts get mentioned and tossed without much, if any, emotion or elaboration. Like Hamilton tells us what was going on rather than showing us.

Still I hung in there when Hamilton introduced  Mommie Darkest, the mother of all vampires [in Blake's world at least], as an antagonist. When the big denouement with Mommie Darkest came in Hit List , it lasted maybe five pages. Big Time Bummer.

Then, Kiss the Dead appeared in mass paperback. I couldn't resist buying it ... just because I was wondering what Hamilton would do once the founder of all vampires had been destroyed. Also had a interesting hook -- the capture of a fifteen-year-old. I waited, hoping Hamilton would get back some of her old moxie. Wondered how defeating Mommy Darkest would influence Blake's life, reactions, and feelings. Turned out ... Blake hardly thinks about it as she chases a laisez-faire vampire who believes in individual liberty.

Okay. I liked the book better than Hit List. But, and it's a big but. The writing competence is there. But the characters don't seem to exhibit much fire. Blake seems to be wading through much of the same emotional ground without a strong mystery component. The flavor of the book doesn't include much cayenne or even chili.

And where oh where did Jean Claude go. Wasn't he supposed to be a major character? There aren't any conflicts going on with him setting up a Council of Masters of American Cities though there is a minor toss up with Asher being pissy. What's new?

I give Kiss the Dead three stars -- even though I'm keeping it for now.

One thing the book did do -- sent me off to read Guilty Pleasures, the first in the series. No, I won't be doing a review. I only review about a third of the books I read. Guess I need to get on Goodreads more.

Turned in the first round of edits for There BE Demons to the Grumpy Dragon. Now seem to be wallowing in summer-type ennui even though we've turned on the a/c. Still trying to finish the first novella of the Half-Elven companion novels ... but it's a slow slog. Think I'm trying to draft it too perfect ... if that makes any sense

I might be self-publishing the short story that started it all:
Night for the Gargoyles
which was published by Spectra Magazine, volume five.
Grumpy Dragon is deciding if they want to do it.
Here's the tentative cover if I self-publish. 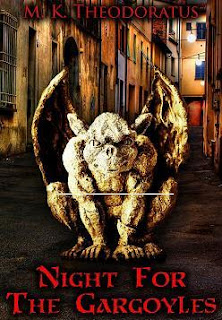