Squeezing All of a Series Characters into the Action

Wasn't going to review Eighth Grave After Dark by Darynda Jones, but the other book I'm enjoying is over 500 pages long and complicated -- and I'm helping my old man learn enough Word so he can transfer his written memoir into a computer. Not that Eighth Grave is an  unworthy read. But ... *shrug* Yah only can do so much in a week, especially when you're in the winter doldrums.


Do you get the idea my feelings on Jones' series are mixed?

The few urban fantasy books of hers I've read have great, action-filled plot lines. Jones has built up a cast of interesting, revolving characters who usually do intriguing things to push and pull the plot along. Then, there's a main character, Charley aka Charlotte, who I find about as mature as my fourteen-year-old granddaughter, which is especially annoying to me after the revelations in Eighth Grave After Dark. She's going to be responsible for saving the world from Satan ... when she's got the hots and is married to the Son of Satan?
A lot is going on in Eighth Grave After Dark. Charley, who is terminally pregnant with the child phophecised to off Satan to prevent the end of the world, is hosting a wedding for her assistant to her uncle in the confines of an abandoned convent because twelve hell hounds lurk on the boundaries, waiting to rip Charley's throat out so said child won't be born.

Yeah, complicated. But that's not the only thing going on in the book. Huge numbers of ghosts are gathering on the convent grounds, including a mysterious nun who refuses to talk to Charley. The wedding goes off with all sorts of weird relatives gathering, including Charely's stepmother who made her childhood miserable. Said Son of Satan is acting strangely. Charley has contacted the parents he was kidnapped from in spite of his forbidding her to contact them. Oh, did a mention the FBI comes to her for help in locating a kidnapped neice of one of the agents?


And that's only the first third of the book.

If you're a writer, I recommend you get the series and map out what the main secondary characters do in each  book. You'll get a great idea on how to squeeze the most out of the characters you create. On the other hand, I recommend you pick a grown up for your main character unless you're writing young adult or children's books. I really got tired of reading Charley make one dumb decision after another, especially when she was putting her child in danger by being an adolescent idiot.

Yeah, I'm recommending the book because it's so entertaining. The craftsmanship is outstanding too. I don't think the pace slowed down much more than to give the reader a chance to absorb the next facts -- though sometimes these were confusing. The book left me wondering why a character couldn't be snarky and grown-up at the same time.

This review getting posted "late" is just another example of my
winter doldrums.
Enjoy the typos.

Got a lesson on why taking a break from your writing can be beneficial. Took a look at the
"chapter" I was trying to fit into the current version of On the Run and realized why the action wouldn't fit. The fact that the main character was called "Cass" should have been a clue. Yeah, I'm still back tracking ... but I think I'm making the manuscript more coherent.

Still, I'm in the doldrums though ... but now its the marketing of my short stories which seem to be getting ignored.
Posted by Unknown at 11:26 AM No comments: 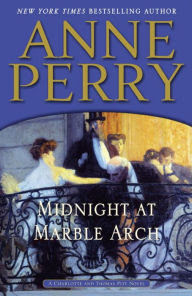 Am wondering how often your give up on a favorite author/series because the last book Bored You.

I lose interest in books I'm reading all the time. Often, I miss a following book because the I didn't finish the previous book in a series because my interest wandered, ie another book stole it.

Sometimes, I think even publishers seem to get bored with long running series and try to mix things up a bit. Think Anne Perry's Charlotte and Thomas Pitt mystery series might be an example. Or, maybe I'm just digging for an excuse why I've missed a couple books because I didn't see them in mass paperback. Still, the Pitt mysteries, totaling more than thirty, are running strong if their rankings are any measure.

Yeah, I ended up reading a trade paperback. When I sent the trade pile to the store, I stumbled over some copies of Perry's newer Victorian  mysteries while I waited for my credit. Haven't read the Monk one yet, but I rushed to read the Pitt one, Midnight at Marble Arch -- mostly because Aunt Vespasia is one of my favorite characters. I wasn't disappointed.

In Midnight at Marble Arch, Perry explores the sexual mores and the privileges of rank when several proper young ladies are raped by a rich banker's son, including the daughter of the Portuguese ambassador. Then, there's the seemingly unrelated rape/death of a society matron. Pitt is settling in with his new promotion to the Special Branch [a political arm of the government] ...and is nostalgic for the simpler days when he was solving murders and other crimes.  Charlotte is regaining her society chops but hasn't lost her fearlessness or compassion -- though she doesn't do much active sleuthing in this book. Pitt learns the identity of the privileged perp early in the book, and the problem becomes bringing him to justice, especially after an innocent man is convicted of the similar crime.

Relationships  -- both personal and societal -- are the keystones in Anne Perry's mysteries. In fact, they take the plot lines in new directions in this book. Don't think the hinted attraction between Charlotte and Narraway, Pitt former boss in the Special Branch, had much traction for others as well as me. Perry seems to opening up the story lines with the Pitts' matturing children and a romance between Vespasia and Narraway. That the latter possibility has me intrigued enough to go looking for the next in the series ... provided it isn't a hard back. [They cost too much and hurt my thumbs when reading for much longer than a chapter.]

Recommended. First, mostly because of  Perry's socio-political chops. She gives as good a feeling for the Victorian age as Upstairs, Downstairs and Downton Abbey did/does for the Edwardian period, especially the conforming mindsets of the better classes. The moralizing got a little tedious, but I skipped that. Second, because her plot lines are complex and intriguing. Plus, interesting subplots featuring ongoing characters with different problems, including boredom.

Writing?
Did I hear you say writing?

My brain still hasn't pushed into gear. It's not like I've writing block. I keep acquiring sticky notes. But I don't seem to be getting words added to my new chapters. Maybe the stock market has me reading more financial newsletters than cleaning off my email? Maybe I'm just feeling lazy? S. A. D. syndrom? Quien sabe?

I'm also setting up my old man a computer so he can transfer the handwritten notes of his memoir into a computer. Must say Windows 10 is much easier on the eyes than 8. In fact, Windows 8 is one of the main reason after costs that I have gotten a smartphone.

First:
Back at the Salt Mines?
Hope you all enjoyed the holidays --
which ever ones you celebrate.
Guess I'm showing my northern hemisphere bias in thinking
the dark time of year is a good time to party. 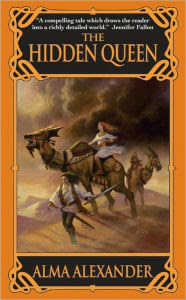 Dipped into the to-read pile a lot over the holidays. One of the most enjoyable reads was Alma's Alexander's The Hidden Queen. Think the book languished there for years because I looked at the jacket and went "eh".

How many books have you read about a lost princess whose throne was usurped by an unworthy pretender?. Thought I read it all before, but I'm still trying to get rid of the piles of book laying around. So, I gave the book its try and was hooked.

The book quickly moves from the battlefield where the king, Red Dynan, is killed with nine-year-old Anghara, his legitimate heir who also possesses the magical Sight that sustains the kingdom, surviving back at the palace. But she has a grown half-brother, Sif, who takes control of the army and sets his sights on becoming king even though he doesn't possess the Sight. Anghara is spirited from the palace by loyal retainers and fostered by obscure members of her mother's family. Several years later, she is betrayed by a jealous relative after she unwittingly displays her growing powers. The result is a pogrom where Sif uses genocide to rid his country of any magical influences. Anghara escapes over the border into a hostile desert land where she homes her powers.


The plot line's a cliche. So why was I hooked?

First Plus. The book is more than another medieval Europe rehash with an overlay of magic. A good part of the book takes place in a desert culture well-flavored by Silk Road nuances where the main character's magic is tempered. At all stages of her journey back to her throne, Anghara is supported by nicely rounded characters.

Second Plus. The book's told from several points of view which adds layers of complications to the plot as Anghara struggles to survive long enough to control her magical powers.

Third Plus. The sensory detail of Alexander's writing is lush to say the least and all her characters well motivated.

The big negative. The Hidden Queen ends with her decision to return to reclaim her country. There is a sequel but it is not readily available. Still, I recommend it if you run across The Hidden Queen in a used book store. It was published in 2009. It's a well-orchestrated read.
~~#~~

Didn't really write much over the holidays.
Just reread a bunch of books
because I enjoyed them the first or fourth time around.
Nothing like lazing around and talking to visiting relatives.

Posted by Unknown at 9:55 AM No comments: