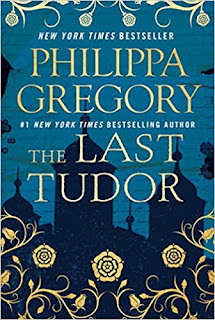 Most weeks I start browsing to see which book on my to-read pile holds my interest. This week's winner: Phillpa Gregory's The Last Tudor. Yes, she has finally come to the end of her Plantagenet and Tudor novels. The Plantagenets are favorites, the Tudors not so much. Still, I've read many of her novels set in the period. They' ve all been fascinating reads.

The Last Tudors tells the story of Lady Jane Grey who became Queen of England for nine days as her father plotted to rule England. [They were Protestants and Princess Mary Tudor was Catholic, which was rapidly important then.] Most people know how that turned out, but they don't know much about her two sisters who were among the possible heirs to Queen Elisabeth I. The book's about being jerked about and imprisoned by someone who has the power to remove your head from your shoulders.

Phillipa Gregory's lack of admiration for Elisabeth is obvious. Very little nice is said about her. Of course, she was dealing a bankrupted kingdom back on its financial feet at the beginning of her reign. But she could have been nicer.

Must say though, I rather agree with Gregory's interpretation. I've always thought that all three Tudors were autocratic despots. In fact, I can remember reading this glowing book about Elisabeth I in eighth grade and suddenly realizing: Hey, this woman's a dictator. Having a difficult childhood wasn't any excuse, in my opinion, to take her anger out on other people. Queen Elisabeth I was lucky to have Cecil as her right-hand man.

Okay, Gregory is a master at writing historical Fiction, but she does it differently than most. Her books aren't dense, weighed down with tons of factoids. She concentrates on her character's thoughts with sparse, judicious descriptions to anchor the reader in the time period. In The Last Tudor, Gregory gives one of the best descriptions of what a lady in waiting actually did in court taking care of the queen.

Other people think she's better than sliced bread; others not. Read a sample of the book and other reviews on:

Romance appears in all genres as well as being a popular genre of its own. I'm not a big romance reader...though I like to think I tolerate it. Anyway, I encountered this discussion of romance novels curtesy of Books Go Social. Darcel Rocket explores Where Are Romance Novels Headed Given Given the Current State of Women's Issues? In the Chicago Tribune. Yeah, it's complicated, a lot more complicated than the news bites lead one to believe. Think the ideas can apply to other genres too. 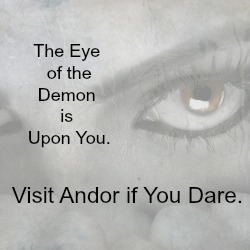 Still revising/editing. My editor was right. The ending seems a little rushled. Am think whether I really want to write a new chapter and drag it out. The middle of the book was important because that's where Pillar's assumptions are destroyed.

But I have got my taxes done and in. Think a lot of people are going to be surprised when they do next year's taxes.

Interested in adding some short stories to your ereader for when you want a quick fantasy read? Check out my Andor stories about the problems demons cause. Available at