Make Your Cliche Stand Out from the Crowd 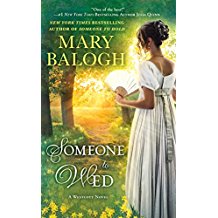 It's no secret that Regency romances are one of the most cliched genres. Just look at the number of the books published in Britain and the US since Georgette Heyer set the formula. I'm guessing there must be over 10,000 dukes [not counting other noblemen] each decade desparatelly searching for a bride. Preferably a spunky "flawed", but beautriful girl who deserves to live in luxury for the rest of her life.

The fact that the "ton" of Great Britain, totally, only totaled about 10,000 adults...and they didn't all die every year...is one of the ironies of the genre cliche.

I'll rest my case that Regencies are fantasies.
Since I'm a fantasy reader, I'll review Mary Balogh's Someone to Wed.

To tell the truth, I don't read many Regencies any more, though I think I still have all of Georgette Heyers books, except My Lord John, stored on my bookshelves. I have this fantasy that I'm going to binge read them in historical sequence. So far, I'm safe. I've never organized them by time period. There one Regency writer, though,  I still automatically buy--Mary Balogh. Why? She makes you engage with her characters as they work through their problems with a romance on the side. They always have a problem much greater than the romance, often a unique problem.

The example I read most recently was Someone to Wed. It's one of her novels involving the extended Wescott family. The book follows the  standard romance, historical variety, formula. Handsome nobleman needs to marry a rich wife, in this case because he's inherited a rundown estate and he has a super-strong sense of responsibility to restore it to profitability but he has no capital. The love interest comes out of left field as a cit who has loads of money but wants a husband. Sparks start to fly when she proposes a marriage of convenience to him. They waltz around a bit and eventually fall in love. He gets the money, and she gets the caring family she's needs.

Think that sounds trite? Maybe. But in Mary Balogh's masterful hands the stoyline of Someone to Wed blossoms. Balogh develops individual characters with believable traits, that  you care and cheer for. She's very sneaky in organizing her novels. Balogh builds a family or clique first. Then, she tells a series of stories of how each lonesome soul in the group finds love and acceptance.

This is all very general because I'm trying to work through her process and presentation.  Plot lines and setting are drawn in bold strokes. Balogh concentrates on the internal conflicts of the characters for her drama. What makes her masterful is that the problems aren't superficial or repetative, but focused on each characters until they are unique individuals. The end result is book after book worth reading. At least, I read them.

Like contests and giveaways? Enter the GoodReads giveaway of There Be Demons if you live in the US. Prize is a chance to win one of five hardcover copies of my fantasy book.
Enter here
30 December 2017 to 7 January 2018

Not doing much. Got all my Christmas preparation stuff done. All that's remaining is to get the daily stuff done. Son's coming to stay a week, but he's just going to have to tolerate my messy house. I'm not cleaning up my husband's messes.

I think my short Andor works are going to be free for some Smashwords promo around Christmas. [All my short stuff is available there, but not There Be Demons.] Supposedly you can download from them no matter which ereader you use. You might take a look if your eReader needs something new to store.

Four of my short stories are perma-free on Amazon too.  Otherwise, they are a whopping 99c. 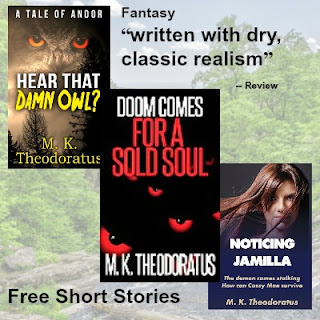 Oh, I won't be doing a blog until January 2018. It's Christmas time. I'm going to sit around enjoying the company of family and friends and binge watch The Lord of the Rings. [Not The Hobbit because I didn't like the movie much. The action scenes dragged on until I found them boring.] Along the way, I'll also probably eat too munch.

I hope you get to do the same.
If you don't celebrate Christmas, I hope you just enjoy,
especially peace and goodwill
and the lack of hatred.